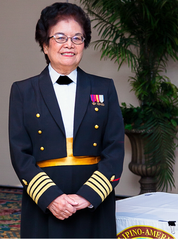 Manny saw service as E-1 through E-9 and up to W4 in the following assignments:
Student in Journalist School, Editor of the newspapers for NAS Rhode Island, the Aircraft Carrier Forrestal in the Mediterranean and MSTS in Japan. He also served as Enlisted Training Coordinator and Race Relations Facilitator at the Bureau of Naval Personnel, Administrative Officer on board the Destroyer Tender Dixie, Training Operations Officer at ASW Training Center Pacific and Director of Curriculum Standards & Evaluations, RTC San Diego.

After retirement, Manny would work as a volunteer interviewer for the Navy Relief Society.  He would determine whether a servicemen applicant was eligible for an interest-free loan or a grant.

Manny eventually would be named to the Secretary of the Navy Retiree Council that met periodically for a week in Washington, D.C. to review the effectiveness of retirement programs and policies for the U. S. Navy and Marine Corps.  He served from 2000 to 2003.  The council members were considered on active duty during their review and travel from home and back.  Uniform of the day: Civilian coat and tie..

CDR JOY GACUYA - 2nd Vice President
CDR Gacuya is a prior Chief.  He earned his commission via the LDO program.
He served as C4ISR Configuration Officer at SPAWAR for 5 years, COMMO at SURPAC for 2 years,
OIC of COMDET 5/N6 for MESRON 1 for 2 years and OIC of ECD5 for two years.  He served as  XO of NR NCTS San Diego for three years and serve as XO once again of the IT unit for Pacific Fleet.
He was called up for active duty in 2013 in support of Operation Enduring Freedom and served as the N6 for NAVELS Forward
in the Middle East for almost a year. Once again he was recalled to active duty in 2019 and served as Deputy Director of C4 at CTF51/5th Marine Expeditionary Brigade in CENTCOM/5th Fleet AOR.﻿﻿
CDR Gacuya decorations include MERITOURIOUS SERVICE MEDAL, NAVY COMMENDATION MEDAL, ARMY COMMENDATION MEDAL and multiple NAVY ACHIEVEMENT MEDALS.

•      Changed Rate to Fireman in 1970 and made First Class Electrician’s Mate in 1974 on board USS Tulare LKA - 112 and acted as the Electrical Officer when the ship became a Training Ship for the Reserves.

•      Separated from Naval Service on February 1, 1977, worked at the Bremerton Naval Shipyard and returned to active duty with the US Navy after three months.

•      Transferred to Shore Intermediate Maintenance Activity, San Diego in 1992, took over as Electrical Division Head and retired from active Naval Service on February 2, 1995 after a total of 28 years of service.

•      Worked for the State of California Employment Development Department and retired in January 1, 2007.

•      Presently active with the Masonic Fraternity at the Scottish Rite Valley of San Diego.

Jay is an Associate Member of FAMOS. He is a retired EMCS (SS) with the US Navy. During his 20 years with the Navy, Jay attended Southwestern College as an ADCOP student (Associate Degree Completion Program) and received his AS in Supervision. While still in active duty, he completed his BBA (major in Real Estate) at National University in San Diego using the Navy Tuition Aid Program. After retiring from the Navy, he completed his MBA (major in Health Care Administration) from the same university.

Jay is a community oriented individual. He was president of COPAO, FACC, PASACAT and was an appointee of then California Governor George Deukmejian. He was also appointed by then Mayor Maureen O'Connor of San Diego in a number of city associated programs.
Jay was a Captain (hon.) with the San Diego County Sheriff's Department under the leadership of Sheriff John F. Duffy. He is also a very active member of Lions Clubs International.

Jay married his childhood sweetheart, Ceferina, a retired US Army COLONEL & a semi-retired Physician. They have two
children, JayJay and Cindy and 6 grandchildren.

His first assignment was to the 1394th Transportation Brigade in Camp Pendleton from July 2012- December 2012 as the Assistant Operations Officer.

Soon after he was activated into the 71st Battalion, Bravo Company at Fort Lee Virginia. There he attend his Quartermaster Basic Officer Leadership Course and graduated in April 2013. After graduation he was reassigned to 1394th Transportation Brigade.

On 25 January 2014 Dennis was promoted to 1LT and was activated into the 1397th Deployment Distribution Support Battalion to conduct pre-deployment training. 1LT Alcazar deployed to Bagram Afghanistan as the Redistribution Property Accountability Team OIC from April 2014 to December 2014.

He is currently serving in the Army Reserves as the Transportation, Supply and Logistics officer of 502nd Transportation Company, Los Alamitos, CA.

Additionally Dennis is back in school and attending Coast Flight Academy at Montgomery Field, CA where he is studying and training to become a commercial pilot.

CWO2 ERNESTO D. LIWAG, USN, Ret.
Treasurer
﻿
Ernesto D. Liwag, CWO2, USN, joined the United States Navy on April 24, 1964 at Sangley Point, Cavite in the Philippines and retired on September 30, 1990 after more than 26 yea﻿rs of Distinguished U.S. Naval Service. His duty stations include the Pentagon and Washington Navy Yard in Washington DC; ComSixthFlt aboard the USS Springﬁeld (CG 7) and USS Little Rock (CLG 4) in the Mediterranean; Navcommsta, Guantanamo Bay, Cuba; Service School Command, San Diego, California; NavCamsEastpac (NCEP) Hawaii; and NavCamsWestPac (NCWP) Guam. He served as the Director of Radioman “A” School during his last three years of his naval career. Prior to that, he performed duties as Fleet Telecommunications Ofﬁcer at NavCamsWestPac, Guam; Instructor at Basic Communications School and Communication Systems Technician School, SSC, San Diego, California; and Communication Systems Technician at NCWP Guam and NCEP Hawaii. His pursuit of Education during and after his naval service earned him a Bachelors Degree in Liberal Arts at the University of the State of New York, a Master of Science Degree in Human Resource Management and a Master of Arts Degree in Education at Chapman University, and a Mathematics Specialist Certiﬁcate at San Diego State University. A 20-year teaching career followed after retirement from the U. S. Navy. He taught Middle School Science and Mathematics at the San Diego Uniﬁed School District. He is married to Remedios Liwag who he met while stationed in Washington, DC. Together they have three wonderful daughters and six grandchildren.In retirement, they both enjoy traveling, attending social functions, doing volunteer work,
and spoiling the grandkids.

Nancy Valerio was born in Bangued, Abra, Philippines. She worked at Security Pacific Bank, Bank of America, and retired from Miramar Federal Credit Union in 2008. She is also currently the president of Abra Association of San Diego County and secretary of
Samahan Filipino American Heritage.


CWO4 ED DANICO, USN, Ret.
Auditor
Picture to follow
Joined the U.S. Navy at the young age of 18 years old.  Attained the rank of E-1 thru E-9 as enlisted and retired as CWO-4 (Engineering Tech) after 29 years of service.  Serve on Destroyer, Aircraft Carrier, overseas duty in Taiwan and Australia.
While on active duty, earned a Certificate of Achievement in Mechanical Drafting and Associate Degree in General Education at Palomar College, San Marcos CA under the Navy Associate Degree Completion Program (ADCOP).  After retirement from the U.S. Navy went back to school and received Associate Degree in Real Estate at Palomar College, San Marcos, CA.  Pursue his boyhood dream of becoming a farmer.  He farmed for 10 years and received his Master Gardener designation from U.C. Davis Master Gardener program.  He is now  completely retired.
Married to Cynthia Danico, RN for 46 years and have two children and five grandchildren.  Enjoy his retirement by traveling, spend time with the family, and volunteer work to the community in different category. 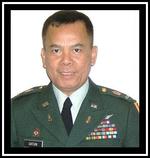 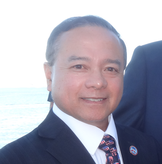 Julio DeGuzman, was the second Filipino-American who was accepted by the Naval Criminal Investigative Service in 1982 as a special agent.
His first assignment was at the Naval Air Station Alameda.

In 1984, he was transferred to the US Embassy in Manila, Philippines where he conducted counterterrorism and counter intelligence operations.  The operations covered the entire country including Subic Naval Base and Clark Air Base.  From 1986 to 1994, Julio was assigned to the NCIS San Diego Regional Fraud Unit where he conducted fraud against the government investigations regarding targeting defense contractors and military personnel in Southern California.

In 1996, Julio opened the very first CHAMPUS Tricare fraud investigation in the Philippines which resulted into locating 27 possible suspects in the Philippines, 19 criminal indictments and 18 criminal convictions of retired US military personnel living in the Philippines.
Julio retired in 2006 after 25 years of service and immediately started working for the San Diego City Attorney as a special investigator. 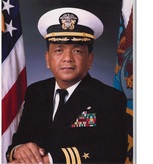 Commander Valerio, a Surface Warfare Officer, retired from the United States Navy in January 2007 after more than 31 years of honorable service. He was born and raised in San Carlos City, Pangasinan, Philippines, and graduated from Mapua Institute of Technology, Manila, Philippines in 1971 with a Bachelors’ of Science Degree in Chemical Engineering. He enlisted in the Navy in 1975, and was commissioned as ensign in 1979 through the Officers Candidate School program. He subsequently performed various afloat and shore duty assignments including Commanding Officer and Executive Officer of USS Racine (LST 1191) and Executive Officer of SIMA, San Diego. He earned a Master of Arts Degree in National Security and Strategic Studies from Naval War College, Newport, Rhode Island and MBA from University of Phoenix.